David_Neufeld
Reflections on place and past by a well traveled environmental historian living in the Yukon bush.

The Art of a River Journey - Nicole Bauberger Paints

Over the past fifteen years I've become increasingly interested in peoples' understanding of the Yukon River and how they express their connections to it. My own experiences of family canoe trip holidays and work trips researching old wood yards and the riparian ecology have resulted in many personal memories and a large number of photos. I've also worked with First Nation communities learning a bit about their oral tradition and the stories of the Traveler, the creator figure who paddled down the Yukon making the world sensible. And I've enjoyed the art of Yukon painters who've thought about the river. There doesn't seem to be that much river art done from the river so I was very pleased when Nicole Bauberger accepted my invitation for a five day painting trip on the upper Yukon River.
Nicole has been working on an extensive highways series, painting a view every 50 km. The series emphasizes journeys - a starting point, the passage and a destination. To learn more see Nicole's website. On our trip we laugh with Wolfgang Schivelbusch's The Railway Journey where a 19th century French commentator describes Parisians posting themselves to the south of France for a holiday, the speed and isolation of the railway car erasing the journey from their experience. For our river trip we look to consider the journey and its travails and pleasures.
Often we think of a painting as a view of place. As a historian I am always interested in the context and action of the creative process. I am less interested in the mechanics of the creation - I find the actual writing of history a mundane, almost bureaucratic chore compared to research and thinking ideas - but fascinated by the context of the creation. What inspires the artist and what are they looking at. Consequently my photos from the trip largely ignore the painting process, except to note it as a private affair between artist, brush and board. I did take a couple of photos to highlight this sensual intimacy of creation. What I have a lot of photos of though are the artist in a geographical setting. What was Nicole looking at, what was happening around her? It is the context of creation, the forces of place that act upon the artist, that fascinate me. With that I can more deeply appreciate the art itself.


We left from Deep Creek on Lake Laberge in early morning ensuring an easy crossing. At Lower Laberge Nicole began her first painting. By the time we reached Carmacks at week's end she'd completed a series of ten paintings. 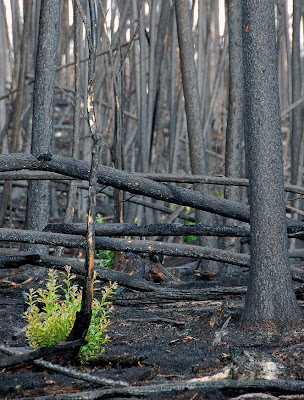 The paintings always looked downstream, into the future of our journey. The past was always present around us however. Last summer's forest fire half way through our trip was a stark reminder of the destructive creation that takes place in the boreal forest. There were no sounds or signs of animals or insects. Even so fresh growth was coming up everywhere.

Nicole painted, I read and made notes for a book chapter. Because of the showery weather I also got to play tarp meister and fabricated a number of fantastic rope and anchor architectural pieces. 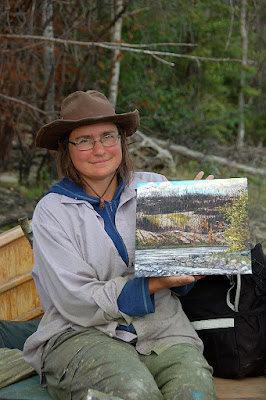 Representations of place are the critical expressions of the Yukon River cultural landscape. These representations exist as told stories, games played, crafts and land skills exercised, place names, memories and histories written, photos taken and artistic forms created. It was a fascinating experience to watch Nicole's ten paintings form during her journey and I look forward to her showing of these works in the coming months. 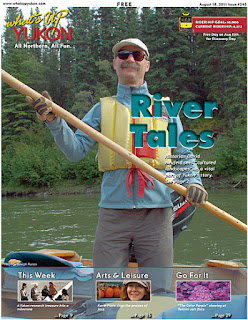 For Nicole's view on this trip see her article.
Posted by David_Neufeld at 11:30 AM